I think its going to be a jewelry kind of day today.

I haven’t made anything since my dad was here except to paint. But, I’ve now decided to give up on the painting. Yep, I’ve gone into my, I can’t do it and it’s bringing me down, stage. It generally happens after a few days of, I want to say enjoyment, so how can it go from fun to despair in such a short period of time?

Was it Dick Frances?

I didn’t work on the one with the out of control tree, but, rather, I picked up some half-finished paintings, one of which I actually believe I finished yesterday. My second or third completed piece out of the hundreds (okay, maybe fifty) I have lurking in the store-room. Wowzers. At least that’s a step in the right direction.

And here it is. 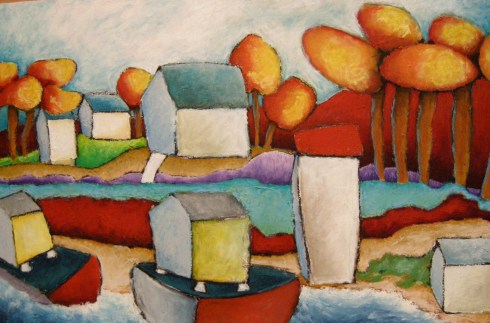 in all it’s glory. No windows, sorry E.

And this one, apart from the sky, is perhaps almost as close to finished. 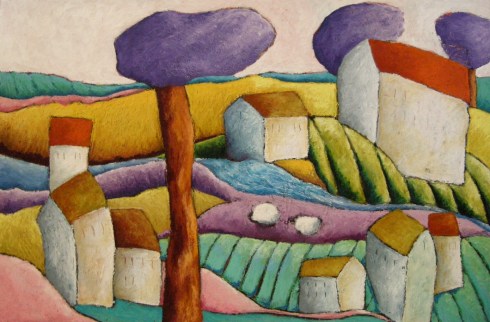 But then I picked up this one – again.

And I think it might just have been the one that finished me off. 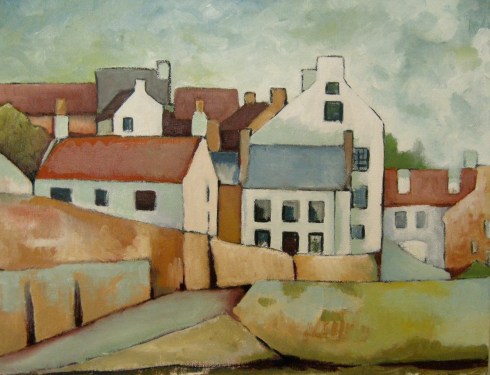 There’s something about it that I really like, it’s simplicity perhaps, and the colours, but, I just can’t do it capt’n, I’ve no the power!

Oh the stress in my heart as I think about it.

And then, as if to push me over the edge completely, I found this on Etsy.

And bought it so that I can put it on my bedroom wall and have it taunt me each day I wake up ….

O.K. I’m going to have to stop now. The self-pity is bringing me down.

Time to move on …

On a good note, the red oil pastel all but came out of the sofa. The only place you can see the remnants of the ‘incident’ is on one of the cushions which can easily be turned over and hidden. The stain on the ottoman was the most worrying for me as there is no turning to do, but, it came out completely, as it did on the other two cushions. Oh, goo be gone, white shaving cream and apple scented washing up liquid, you are now my friends for life. How can I have been so dismissive of you for all these years …

So, jewelry it is. Either that or moping on the sofa – and that’s kind of getting old news now. I have an art festival coming up in October so perhaps I need to make some simple, cheaper, items, but really I want to set some more cabochons. I’m not going to let it bother me though. I’m just going to wing it.

Really? Is the whole day going to be like this? 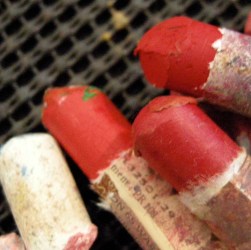 D I really love the last painting you did the one above the bowl you bought on Etsy!

the one that’s put me over the edge. what kind of friend are you … 😉

I think your paintings are wonderful. The simplicity is delightful and I know that it takes considerable skill to get a “simplistic” look, even though that isn’t the correct word for it because it almost sounds dismissive. Your unique style is a treat for the eyes.

Almost every day of my life I go thru the same thing as you. “I can’t paint” is almost a mantra in my little pea brain that I am slowly quieting. This summer I have taken to journaling about my creative process. It has helped me enormously. I only allow myself to process creative things in there as I stumble and bumble my way along, hoping that some day in the future this will get easier. I have about 15 or 16 unfinished pieces surrounding me at this moment, but I always have worked this way. It’s normal for me.

So don’t feel as if you are alone. There are many of us creative loonies going thru this same thing. A friend of mine had this hilarious video on You Tube years ago where he showed himself in various stages of doing an abstract….all set to music. And ending with him hanging himself with a belt…I laughed until I cried. Sadly, he took the video down because some people were offended. But I could relate!!

writing a creative journal is great. that’s exactly why i started this blog – to attempt to diminish my fears by putting it all out there. i love to paint, but, along with writing, it’s one of the hardest things for me to do. i have absolutely no confidence when it comes to both of these, but, i am determined to get to the point where i can paint simply because i love it and with no agenda.

i would have loved to have seen your friend’s video 🙂

i have come to realize that fear is part of my creative process. anger, frustration, exhilaration, happiness…all of these emotions are (for me, at least) part of it.

i am usually happiest when i am STARTING something new. the ideas are churning in my head and i think i’m the luckiest girl in the world. and then…….i have to keep going and going with that piece and i wildly plummet to depths of despair at some point. might only last for a few minutes….but it’s there.

once i feel that i have completed something…..then i feel happy and proud. it’s done! eureka! then i wait for at least 3 days to see if i am still happy and proud of it. sometimes i stash my work in a corner facing the wall and look at it again with fresh eyes. sometimes i pull one out that i finished years ago and redo it to make it fit with my evolving aesthetics.