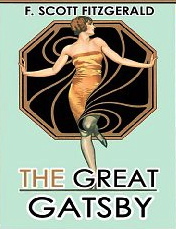 Because I have to.

The first sentence that made me feel as though perhaps this wasn’t going to be as tedious a task as when I first attempted to read it, waaaay back in school, was:

“If personality is an unbroken series of successful gestures, then there was something gorgeous about him …”

Really that’s only part of the sentence, but you’ve got to love that word – gorgeous? There’s something, I don’t know what, about it when used here, by a man, toward a man. It smacks of jealousy to my mind, or contempt. Perhaps admiration, but I don’t think so. He’s probably merely sharing an observation, but what a great introduction to this man. I know immediately that I don’t want to like him, but probably will because he’s going to be all charismatic and charming, and we’re going to fall into his trap …

Either that, or I’m way off base and, as usual, am living in my own little made up world of what I think things should mean.

It reminds me a little of the way Patricia Highsmith writes about Ripley. Now, there’s a creepy fellow …

Anyway, I’m reading it because I can’t go to see the movie until I have, and the movie doesn’t look as dreary as the book seemed to be when I was a kid.

In the rest of the news: I spent yesterday painting. Sounds good fun but it ended badly. Going out there in a minute to throw all my brushes away.

Why is it practically everyone I know (who reads, so not THAT many) has taken up classics?! I’m going to have to join in the craze so as not to be left out of all the good discussions…