Again with the empty tank!

Just when I finally seem to have recovered from my last, fraught with danger, danger, Will Robinson, acetylene tank refill trip, the darn thing’s empty again!

What’s up with that!

Surely I only just changed the old one out for the nice fire truck red one. 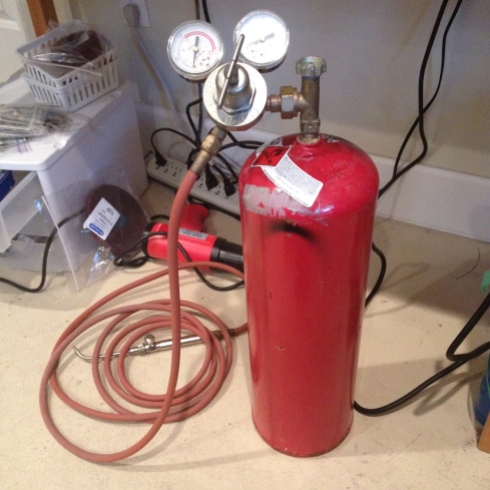 I thought I was safe for at least another six months!

Yes, there was a slight indication before Christmas that it was empty, but I just couldn’t believe it.

I thought the gauge was wrong. That just because it read empty it didn’t really mean it. That it was just playing with me because it knows how distressing the whole driving it down to the gas shop is for me when I could almost nearly blow up driving there, but more likely probably blow up getting home.

In my itty bitty Mini car which, let me tell you, doesn’t like it either.

Now it seems that I have to be even more super duper distraught because apparently you should NEVER (getting a bit distraughtier now) EVER run your tank when it says empty.

The flame is still burning. How empty can it be?

What the hell is burning when I turn it on?

So things came to a head yesterday when I was trying to make this.

And the soldering was just being completely, annoyingly, uncooperative.

I could have listened.

I could have saved myself a whole afternoon of trying to ignore the signs.

But, and let me ask you.

Why, if you’re heating the silver, and in fact you’re even keeping the flame exactly on one spot for the whole time and nothing’s happening, would you stop?

Why, when ordinarily the silver would melt into a blubbering heap just for even looking at the flame, would you say to yourself, hang on, something’s not right here?

Why wouldn’t you just give it up and save yourself a whole bunch of frustration and anguish of just knowing that you’ll never ever be any good at this whole soldering thing anyway so why not take up mahjong instead.

There must be a mahjong club somewhere nearby.

Because I’m bloody mindedly stubborn is why.

So this is where I ended up. 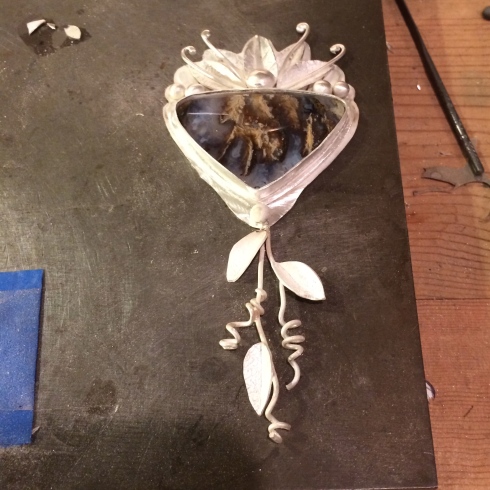 The bottom is not attached yet because of the small problem with the tank, and I’m not so sure I want to put it on there anyway as I feel I’ve taken a beautiful stone and surrounded it with my hideously bulky bezel design.

But that could just be my imminent death issues talking.

Why didn’t I think to make more friends with benefits instead of shutting myself away in the studio. Surely there’s a nice one out there with a truck who’s willing to risk their life for me.

Maybe that neighbour man with the car shop in his garage, won’t mind me giving him a quick chat up.

He knows who he is. I’ve seen his tank…

So again I say my farewells, my nice knowing yous, and I know that you’ll share my regret that even though a lot of the gadgets on Star Trek are now in popular use they never have yet caught on to the notion that a beam it up machine would be particularly handy for some of us, let’s say, more fragile souls out here.

0 thoughts on “Oh god no! Or, where the hell is Scotty when you need him!”

It is important to me to credit photographs taken from other sites. If you would like me to remove your photograph, or the credit is not correct, please contact me and I will either remove it or change it as requested. coldfeetstudio@me.com
Loading Comments...
%d bloggers like this: