I found a welding shop a little closer to me and bit the bullet.

Before I left I did find an online shop which would deliver a tank of acetylene to me the next day. I didn’t use it as I’d lost my wrench (i.e. someone took it) and couldn’t get the regulator off. As it happens the man in the shop had a lot of trouble with it also so I doubt I would have been able to easily exchange my empty tank with the delivery man anyway.

They appear to deliver to most places in the U.S. (sorry back home folk and other not here people) and they don’t charge for shipping, just a $10 handling fee. Which seems a pretty fair price to pay for them to possibly blow up instead of me.

So to all my soldering friends out there who are weenies like me here’s the link.

This just takes you to the acetylene page, but I’m sure they have other exciting inflammables also.

And I’m sure there are many more companies out there willing to risk the lives of their delivery men if this one doesn’t work for you.

Here’s what I learned from picking the brains of the nice acetylene shop man.

The acetylene is mixed with acetone and if you let the tank run empty there’s a risk that the acetone will be drawn from the bottle.

Apparently this is bad.

“Acetylene is dissolved in acetone in the porous filling of the tank. It is NOT stored as a compressed gas, because if that is done it can/will explode at any pressure above 15 psig. If you draw more than the 1/7 of the cylinder size per hour, acetone from the tank is drawn out and may damage the regulator, hoses and seals. The flame will sputter. If too much acetone is removed, the tank can explode when subjected to rough handling after use. Acetylene is a dangerous material and needs to be handled with respect.”

So, I won’t be doing that again, and perhaps neither should you Penny 🙂

Another thing he said was that after soldering you should turn the tank off and run the gas out of the hose. You should also open the pressure thing completely until the next time you use it.

I usually run the hose empty by lighting it and using the flame to ball up small pieces of silver to use later. I do this until the flame just goes out on its own, but I haven’t heard that you should open the pressure gauge before, and although I listened very carefully I’m still not completely sure why.

Sometimes I don’t even run the gas out of the hose :/

I might have to stop reading all this stuff now as it’s beginning to make me feel nervous.

Things I did know are.

Don’t run the thing with the pressure above the red danger line.

I did for my first tank because I didn’t really think the red line was talking to me.

Sometimes ignorance is bliss, but not any more.

See that big, obviously important, red line there on the left dial. The arm shouldn’t go beyond there. In fact the man said that I shouldn’t need for it to go beyond the 5, but I found that the flame wasn’t doing its job at that pressure so I upped it until it was soldering better.

Not above the red line though.

When the arm is at the bottom as shown in the right dial, it’s empty, and not just pretending to be, so get it back to the shop before you blow up.

Or have the nice delivery man come.

If you do have to take it in your car, keep the tank securely upright and crack your windows slightly as, according to the shop guy, sometimes the gas can escape,

(O.K. so he didn’t say that but I thought I’d add a little more drama as I’m sure we haven’t had enough. Something equally bad will probably happen though, so crack your windows…)

Oh, and don’t flip the car over or smoke while you’re driving home.

I thought that was his best tip.

End result after a fraught day. 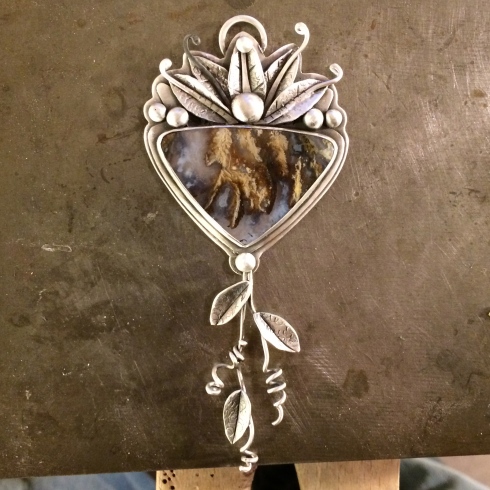 Just a little more cleaning up and on to the next thrilling adventure.

What a beautiful piece that turned out to be! Thank you for this new info about the dangers of acetylene and for the link to the page on compressed gas safety. It’s interesting that acetylene is mixed with acetone because I’ve always thought that the gas smelled like fingernail polish remover…..so now I know why.

That gas delivery service is a good idea, and if I ever upgrade to the next biggest size tank I may decide to use that service. Right now though I have the small 10 cu ft MC tank, and there’s a place 2 minutes from my house where I can go exchange it, so it’s not too big a deal yet.

But yes, I think I will start to pay attention to the gauge now so that I don’t run it empty.

You going to the bead show this weekend?

No I don’t think I’m going. I have to stay away from there. It’s too dangerous for me to go. I have a sickness that prohibits me from leaving there without spending several hundred dollars, LOL.

Love the advice…makes me glad I decided not to solder! The piece is just beautiful! – good job!

Kinda like looking at the mysterious insides of the beautiful flowery/imaginary stuff in silver on the outside. or the silver is the outsides of a magic cup, and the mineral is the secret potion hidden inside the cup.

I use a local welding supplier to switch out my tanks….and it’s always a tense drive home with the full tank nestled in a blanket and the seat belt around it to help keep it secure. They will carry my tank to the car but won’t put it in the car. Someone told me if the tank falls over or is dropped in a way that damages the valve the tank would basically behave like a missile and go shooting off. I keep that baby bungee corded to the leg of my jeweler’s bench!

I know. It’s almost too tense for me. The morning of switch out day I go through the motions paying particular attention to everything I do as I fully expect it to be the last time I get to do those things.

Bit of a drama queen really 😉

i was taught that if you dont drain the hose after use the acetylene that remains will burn holes in the hose causing leaks. also , a while back i used acetylene and oxygen , both b tanks. i made it a habit of getting my exchanged out a little before they were empty. i would load them up in the back of my volkswagon 2001 bug and off i’d go.
one day while doing so, with both the oxygen and the acetylene , same size as yours (b tanks) in the back of my trunk….. i had a FORD F 150 hit me from the drivers side at a really good rate of speed. i was blind sided .
i was hit so hard i blacked out and then couldnt get out of my car. to shorten then story , the tanks were fine. when i inquired about this later the guys at the shop told me that gas tanks are much safer to operate and transport than the “olden” days. and that to cause catastrophic events you’d pretty much have to drop the tanks upside down from a good distance up to break the opening off. i’m sure i’m not using the correct terminology here, but you know what i mean.

i have also experienced leaky hoses from my dog favoring my acetylene hose as a chew toy. the gaseous aroma is overwhelming!

That makes sense Connie, I think I’ll definitely be bleeding my hose from now on. As for your dog! Man! At least the smell is bad enough to catch it in time 🙂