I was getting ready to make this.

Then my family came.

I really liked the lightness of this design, but for some reason, which I can’t remember now, I went a different way with it.

Is this self sabotage I wonder.

To make jewelry which is not to the taste of the majority of people.

Or is it a genius scheme to save me from ever parting with my beauties.

We may never know…

So this stone, which is beautiful by the way and now happens to be one of my new favourites, had to be pried from its setting twice because one of the balls kept falling off.

I hate it when this happens and for it to happen twice, each time after I had cleaned it, blackened it, polished it and smiled with satisfaction at it, just sent me right over the edge.

The best way I’ve found to pry a stone from its setting once you’ve pushed the whole bezel collar over and sat back thinking it’s done by golly, is by using a scalpel.

I used to use one of these double ended pottery tools 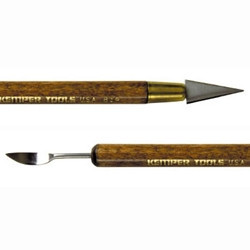 Because I’ve got loads of them hanging around.

But even though they look thin, the knife-edge is actually a little too thick and it’s also easy to bend.

So, after much deliberation, like a nano seconds worth, I went to the scalpel.

Which seems more dangerous, and it is, but sometimes we have to blow caution to the wind and just get down to business.

Just gently slide the blade down in-between the bezel collar and the stone and wiggle it slightly until a small opening occurs, then slowly move it around the stone. Sometimes you can’t slide it and have to push it down again to make another opening.

The key is to do this slowly and to not push the collar too far out from the stone all at once. It’s best to do it in little movements as you work your way around the stone.

If you try to move it all at once the collar will get marks and crinkles in it so you want to do the least damage to the collar as possible.

Otherwise you may as well throw it in the bin and start over.

The tip of my scalpel blade snapped off which makes it easier to use. In fact you might want to take a small section of the point off to begin with so that you don’t have it fly into your eye when it decides to do it for itself as that wouldn’t be good.

Needless to say, always use your safety glasses as well as crossing your fingers.

So, there you have it.

I sincerely hope that you won’t ever have to take your stones out because your balls fall off, but if you do, know that there is hope.

0 thoughts on “If you can remember, way, way back, before yesterday”

It’s beautiful…someone will fall in love with it and have it for themselves! Welcome back!

This info came just a few hours too late. I ruined a bezel last night trying to remove a cab. I tried using a razor blade. Where do you get a scalpel?

Sorry ?
You can get one at any hobby shop. They might be under craft knives.

I just tried making my own tool for opening a bezel to remove a rather large stone and it worked! I saw a stainless steel dinner knife lying on my work table and wondered if I could make that work since I didn’t have a scalpel and I didn’t want to wait until I found one. I ground it thinner in my grinding wheel then smoothed and polished it. It probably wouldn’t work on a small stone. If you hadn’t posted that removal was even possible, I doubt I would have tried it. Thank you for inspiring us.

Turned out to be beautiful!! I am also having trouble with the balls falling off, when I think they are fixed. Do you have any advise on success with them?

Well, I’ve been re-thinking soldering, and I really am beginning to think that we put too much worry into it and set ourselves up for failure thinking we just can’t do it when we fail. I don’t really know what I’m doing, but I might talk about it later in the blog. I don’t know though, as there are so many people out there who really know what they’re doing 😉

That’s Victorian?! I guess I can be glad that I am unlike most of the population.

Yes, ball trouble can be very annoying! The piece is stunning…