I see this poor fella. 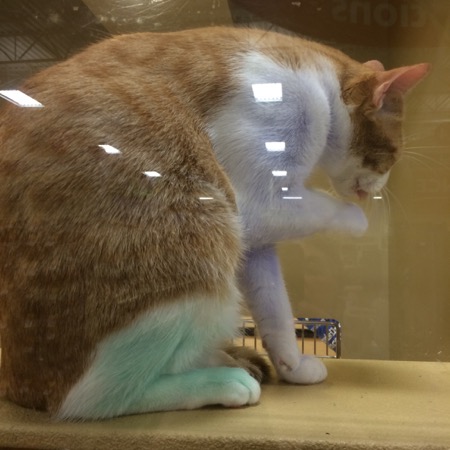 You see P told me that if I didn’t buy cat litter on the way home that day that I couldn’t live here any more.

Did that mean I would be locked out of my studio, I wondered quietly to myself.

I got the cat litter.

I don’t like to go to PetsMart because I have to look at the cats.

I can’t look at the cats.

In fact I’ve been banned from looking at a cat from inside a five hundred feet no go zone.

Once I look at a poor forlorn PetsMart cat I’m on a downward spiral toward becoming the crazy cat lady.

I can’t believe he forgot it when he told me, in no uncertain terms, to get the litter.

We can only get the sort we like at PetsMart because I kept buying every bag that was on the shelf in Kroger and I think the man got a bit fed up with having to restock the shelves.

It was just one more hassle in his stressful day.

So he discontinued it.

So now I have to venture into the land of abandoned cats else I become homeless myself when P chucks me out for not getting the litter.

Fortunately I made it out alive and cat free, but I did have to take a sneaky peek in the kitty kennel and found the poor soul above who just happens to look a lot like Charles. A cat relation of ours.

Who does that to a cat?

It’s not even his colour.

He’s more of an Autumn, which would be browns, burnt oranges and suchlike.

If your colouring is light you will be best in Linen or Peach.

If your colouring is medium you will be best in Peach or Almond.

If your colouring is medium to dark you will be best in Almond, Warm Blush and Fudge.

The best eyeliner and definition colours are going to be Cocoa, Fig, Olive or Forest.

For your base shadow you can choose from Pearl, Sand or Toffee.

For your ‘colour’ add in Toffee, Ochre, Sage or Olive.

O.K. so I guess this would make him  a transvestite kitty as I’m pretty sure he’s a guy cat, but…

NO mention of spring greens or purple.

No wonder he wound up in the cat adoption center.

It reminded me of that one time at the vets when I thought a dog’s toe nails were rotten and bloody with some terrible fungi disease,

but with a particularly nice shine…

Geeze. What’s the world coming to?

He isn’t actually that new, but has been hanging out with the others on the plier rack waiting for his moment to shine. 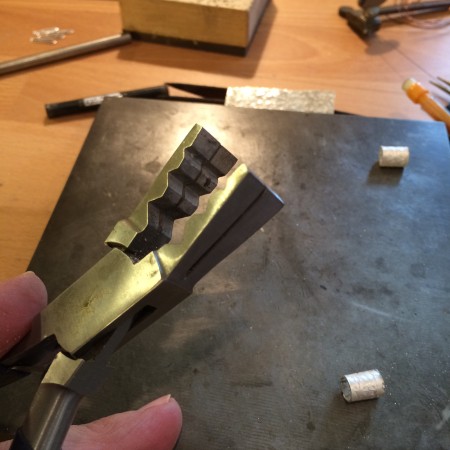 And boy did he shine.

As you may know I’ve had a LOT of trouble cutting tubes. 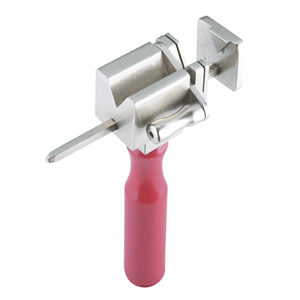 Which cuts tubes all right, but annoyingly wonky tubes because I just can’t seem to saw the ends level.

I also have this, 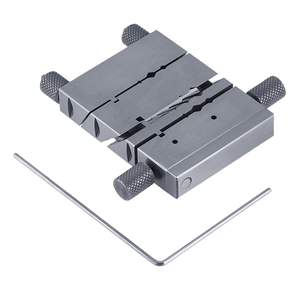 Which looks as though it will cut any tube anywhere anyhow you want it to be cut.

So long as you want it to have equally wonky ends which you then have to spend five hundred years filing down.

Yes, I know that some people use these tools with fantastic results, but I’m not one of them. 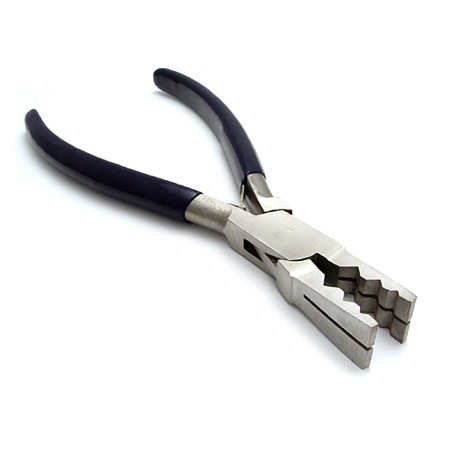 Just look at it in action. 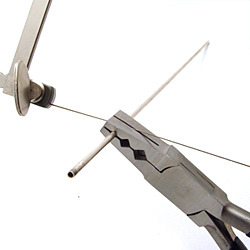 So simple, yet so wonderful.

16 thoughts on “So there I was, a little fed up and a little bored, when…”

I don’t like to go to PetSmart (or PetCo) either, and they don’t like me. It isn’t the cats (don’t get me wrong, I love cats), it’s the birds. They’ve caught me writing on the price tags and signage, “Adopt, don’t shop!” and it seems they’re against that notion. Then sometimes when I see someone looking at a parrot with an associate, I’ll work my way into the conversation to see just how prepared they are to take on that responsibility. Turns out, none of them have been. Or they came back after I left.

On another note, I searched Rio’s page and then Googled “Phenomenal Tube Cutting Dream Come True” and I can’t find it, and I totally want it! Does it by chance go by another name? 🙂

Ha! I think I attached the link to the photo, but I’ll check.

I hear you about the birds. I just don’t like seeing any animal like that, even those horrid rodents.

Where did you get that fabulous tube holder for cutting tubes? I really love the miter jig. I have trouble filing straight edges for soldering rings, etc. I have also used it to file tubes flat. I’m sorry it’s not working for you.
Have

If you mean the super fantabulous tube holding dream pliers, you can get them here.

Purple gold green…..she’s a Mardi Gras cat silly ! She’s a bit early, or late but Mardi Gras is always in style and doesn’t have to match anything that’s why we love it soo ! Party like an alley cat and you did adopt her …..didn’t you?

Ohhhh, now I see it.

Nope, didn’t adopt. The lack of litter would have thrown me out. The addition of a new kitty, however party savvy, would mean death…

We have four already.

Your posts are always a good read…and informative! Thank you for taking the time out of your busy day to share with us.

🙂 You’re welcome Sandy. I write them mainly when I’m procrastinating getting out of bed and doing something constructive 😉

I’m glad you didn’t get thrown out, anyway–your own four would have been heartbroken. As for the tools, I’m always glad when it’s you who buys all the expensive ones and then finds me a reasonably priced one that actually works. 😉 So glad I’m a late adopter.

🙂 I’ve never found a tool yet that I can resist.

Only my paycheck helps me to resist….

I just love this tool too! I have had it for awhile and it is the one I use. Jan P

I know. I bought it out of a last ditch hope, but didn’t really believe it would work. That’s why I waited so long to actually try it. It’s brilliant.