But before I posted it yesterday I took another photograph as I wanted to show you the back of the bracelet. 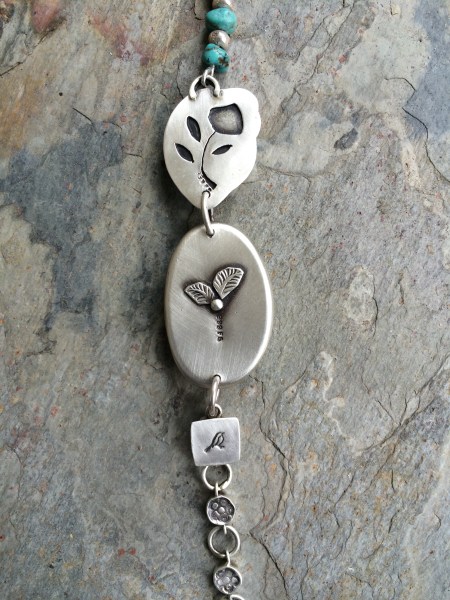 I love making the backs almost as much as the front.

And I started another painting. 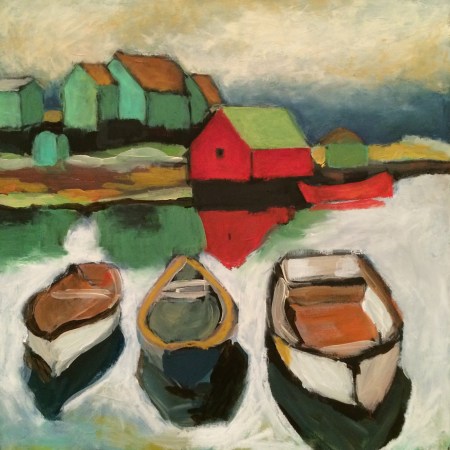 I’ve begun to realize that I’m a starter painter and not a finisher.

I must have about fifty of the darn things hanging around.

I’ll be that crazy old woman who leaves behind so much stuff that her kids have to pull their hair out deciding what to do with it all.

The cats must be attracted to weird start-up people because this is how I wake up most mornings. 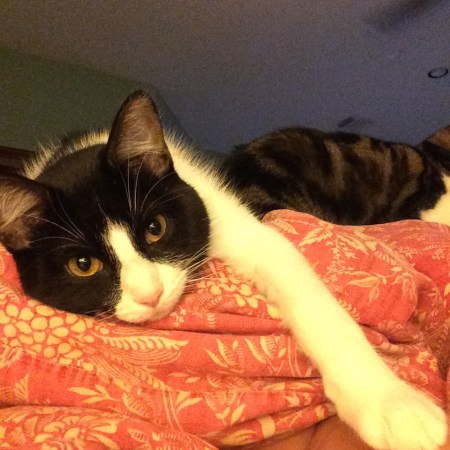 On my side with at least two cats balanced on top of me.

What to do today?

I always wake up at a bit of a loss really.

On the weekends P watches his football team lose. 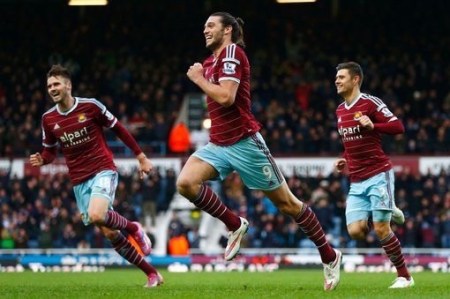 This is them running away from the ball.

I used to hate football, but now I love listening to it.

There’s a special football noise that reminds me of home and it’s kind of comforting.

It comes with some danger, however, as I’ll be sitting here in another room, happily dribbling out my thoughts to anyone who cares to read them, and I’ll either hear despondent groans, or loud euphoric yells of victory which make me jump out of my skin.

So I’m sitting here wondering what to do today when I know full well it will involve the studio.

I’ve been thinking pottery which kind of annoys me as that’s a whole new ball game when it comes to disappointment.

Worse than the painting as at least you can change a painting where as there’s no hope for a pot once it’s fired except to smash it up and make mosaics.

So all that’s left to say is a happy Sunday to you all and may your football team always win.

Not sure about that, but I have a lot of fun 😉

Eh, you are doing better than I am this weekend. I’m going to put all my jewelry equipment for sale on craigslist. It has been that bad.

Been there! You’ll only have to buy more when the funk goes… 😉

There are just too many beautiful things going on at that back! If it were mine, I would have to hang it somewhere in mid-air where you could see both sides 🙂
Maybe you could do a piece with just the back, and no front! 😛
I spent a large part of Sunday doing a Christmas present order involving bone components I made myself (specially ordered, that part) — I like the result a lot, but a lot of other people probably think it looks a bit funny (they say it’s “special”…, but then I was told to do something not very ordinary!). I do think there is a chance the person who gets it will like it, though, she isn’t your ordinary bling kind of person. Quite a satisfying day, if only the hoovering fairy had bothered to pop in too…

Haha. I love that you call it hoovering. We do too although now we’ve lived here too long and have started to call it vacuuming.
I’d love to see the bone piece.

Interesting — now it happened to me: my comment just disappeared! Have to start putting a copy on the clipboard before I press “post”.
What I said was: Remember, I’m not a native speaker, but I do try to use British English with you, if I happen to know the difference… but here it was just chance, the only word that came to mind!
Can’t post the bone piece on my web page before Christmas, or she might see it! But I might post it in Lima Beads Design Gallery, as soon as I can get a photo of it in daylight (should be possible tomorrow when I work from home). I don’t think she finds her way there. And there are enough “beading” elements to it, maybe — I don’t usually post stuff involving only hard-core metal work there!

No, don’t post it until after the holidays. Where is your website again. I can’t find you.

Hi Deborah, just to let you know that even though you don’t hear from me does not mean I don’t read and enjoy your blogs, I wrote a loooooong comment on your Thanksgiving blog, only to find that it did not post and actually disappeared who knows where! I dont know where the problem is, probably with our internet server here in South Africa. Anyway, it was about how absolutely sublime your turquoise bracelet was, but more about your paintings, that I think is so colourful and cheerful and beautiful and how so many people would just love to have one like that in their homes. A famous artist (I forget which one) said there is no right or wrong in art, and often when you say a painting is not finished, to me it looks finished and good enough! Hope this comment will post! Cecilia Robinson

I love it when I hear from you as I get to think about South Africa all over again. I don’t know why the comments keep disappearing 🙁 I’m going to check it out again. I think I fixed the photographs showing sideways, but I can’t be sure as they always looked fine when I post them.
Do you have a blog Cecilia? I’d love to read about your work. Your ‘capped’ rings, like the pink sapphire and iolite ones, are lovely.

I actually think the problem is on my side, I love talking to you and tend to write long posts, and while I am busy doing so, my internet connection is broken so when I post, it just disappears into oblivion. So I have to be quicker! I don’t have a blog yet, but plan to start one in the new year. I am still in the beginning stages of my jewellery making career, I only really started a little more than a year ago, so I am still finding my style. I can see in my latest pieces, that the same organic style that I use in my ceramics, is now developing in my jewellery. At present I give most of my jewellery away to my daughters and friends and family, they think I’m the best thing since sliced bread and I just love seeing them wearing my jewellery. Next year I will start to do more marketing and selling, so that I can make more jewellery! I will keep you posted about my new blog.

I’d love to read it.

It’s great when a style starts to come together. I don’t think mine has formed completely yet, but it’s getting there.

http://www.pearlsandme.fi
That is one of the odd things with the replies in your new theme — it’s a bit buggy, maybe — I try to log in with the WordPress icon, and it sort of works, but not as I’d expect it to work, and the link to my website that should be there seems to be broken. Or maybe it doesn’t work, its just the cache, and this site never sees that I’m supposed to be logged onto my WordPress account…?? I’ll have to look into that, too. Anyway, Cecilia thought she has a bad connection, but I know I had the best connection possible (cable to a government network) the other day when my reply disappeared, so it’s not just that.

Yep, at least got that one fixed, can at least get my name to lead you somewhere now…! But that WordPress icon login is still a bit of a mystery. It actually doesn’t do anything.