I had the old end of the world earthquake dream this morning.

It wasn’t all bad.

As we waited for the pre-quake green black apocalyptic storm clouds to totally cover the sky a small van pulled up down our road handing out supplies to the residents.

Did we need any survival supplies?

I chose a couple of dust masks.

You know, those simple ones with the little vents in the front.

Seemed as though they’d come in handy.

A large high rise was due to fall onto us once the quake started. Instead of moving away from the object of our imminent death, we instead contemplated the chances that the gaping hole torn into the side of the building would fall exactly over where we waited thereby saving us from being crushed to death.

I tried to calculate the exact trajectory of the high rise’s collapse, but ultimately knew that the life saving cavity would miss us by a few inches.

Still didn’t get out of the way though.

In other, less violent, news I just managed to send off another $7,000 to charity.

This is a very simple chain which you may have already seen on my Instagram page, and I promise this post is not as long as my last one.

I haven’t calculated how much though, so sorry about that.

First up you will need a torch to ball up the end of the wire.

After which I like to use a large cup bur on it to round it out.

You won’t need the bur if you use fine silver as it will make a perfect ball when you heat it, but I tend to use sterling for most of my chains.

You can find a selection of cup burs – HERE.

If you have never balled the end of a piece of wire before simply hold the wire vertically in a pair of tweezers and move the flame up and down the bottom of it until a ball forms. If you keep the flame on the ball for too long after it has formed it may fall off, so be sure to remove the flame when you have the size you need. 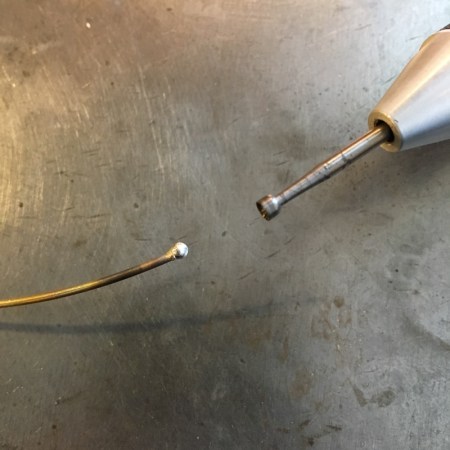 Now make a loop as shown. 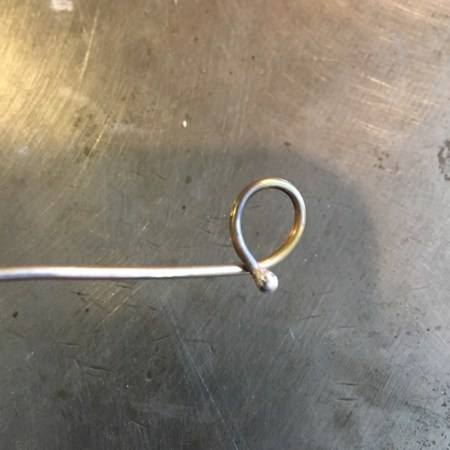 Solder the ball end at the spot it crosses over the other end of the loop and then make another smaller loop and cut off the extra length of wire.

This loop is turned and soldered just under the first soldered join. 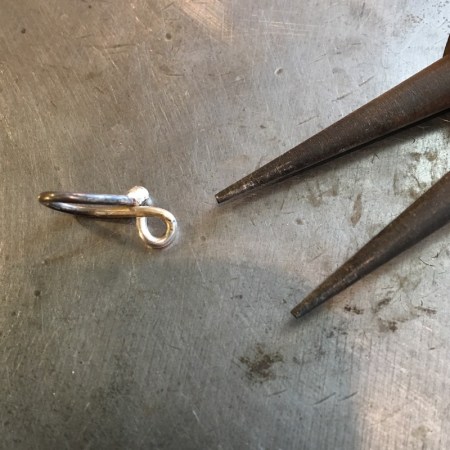 Take the remainder of the wire and ball up the end again.

This time you will thread the larger loop into the smaller loop of the first link before soldering the loop together. 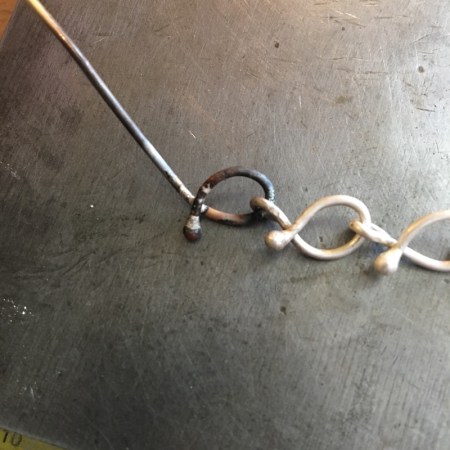 After soldering it make and solder the smaller link as before. 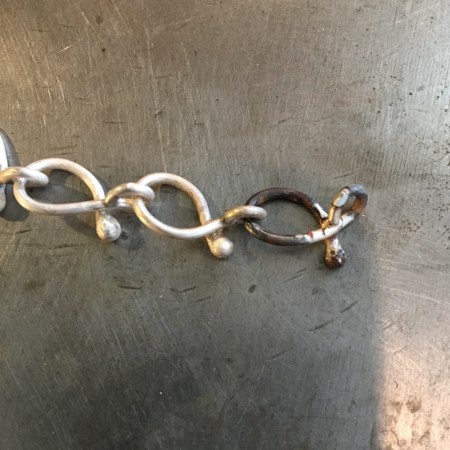 And continue until you have the length of chain you desire.

I made sure that the balls were all sitting the same way and that all the links matched.

You can mix it up if you want to.

Here are some more photographs of the process. 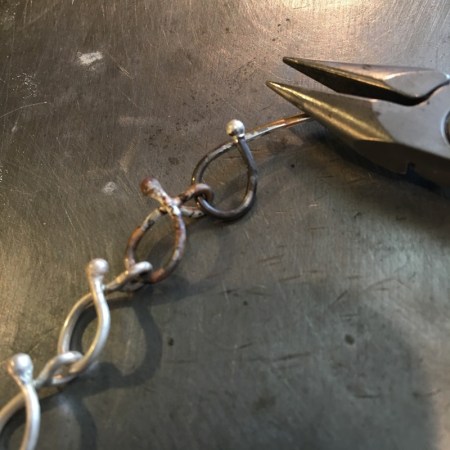 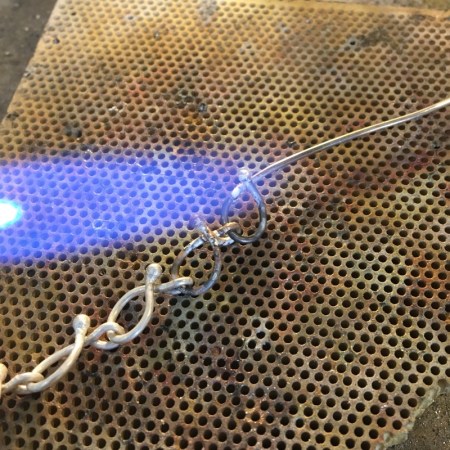 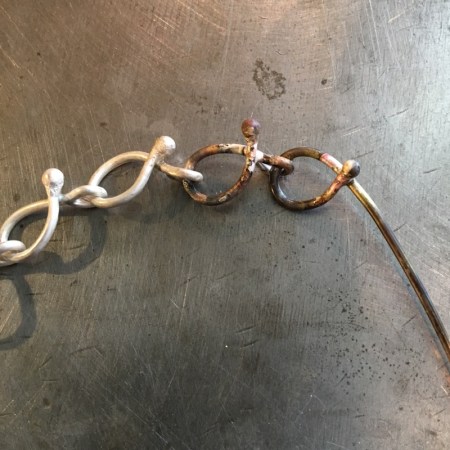 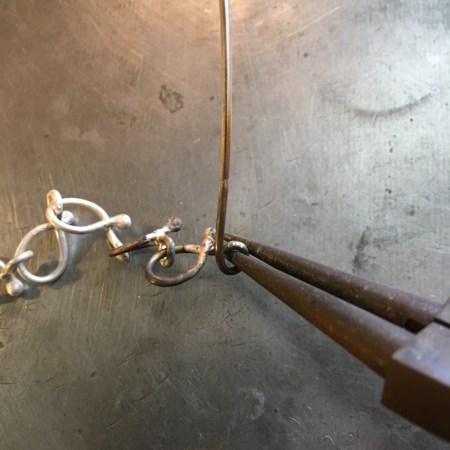 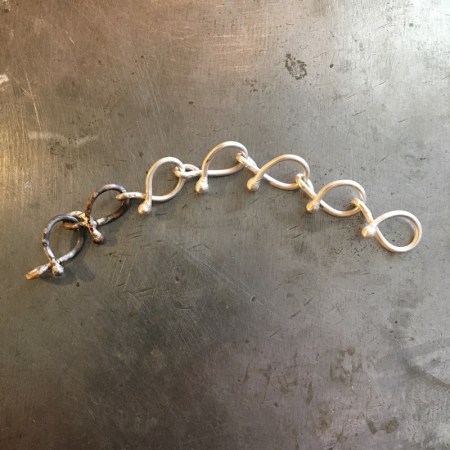 Now put a catch on it. 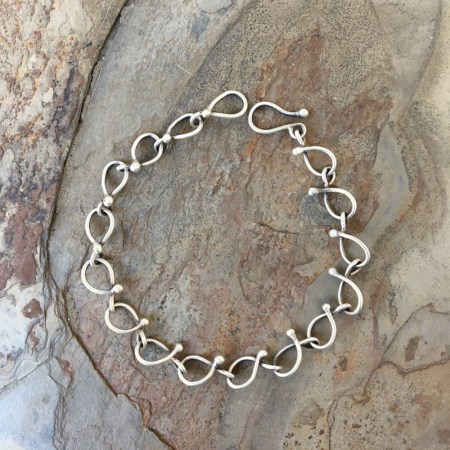 And you have a new bracelet. 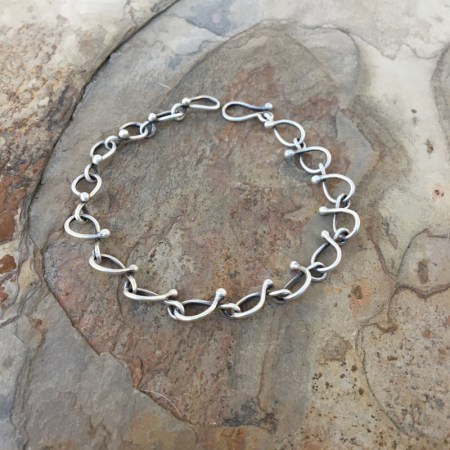 Now I’m going to get my survivors guide to the end of the world out and see if there’s anything else I might need to start collecting other than dust masks.

I do love your chains. Thanks for sharing. x

Neat! It makes a lovely bracelet, I like the airiness of it. I never thought of using a burr cup on those nasty pitted balls you get on sterling so often. Thanks for the tip! (I discovered that Argentium silver doesn’t have the pits so I’ve been using that for making balled headpins and stuff although sometimes they go crooked so I have to pay better attention.)

I haven’t tried argentium yet. I put a bunch of it in my cart once, then backed out 🙂

Love your work. The talented Kathy Hansen turned me on to your blog.

Hi Helen 🙂 Thank you. I don’t know of Kathy Hansen, but will try to find out about her and you 🙂

I like it b/c of the smooth balls (I snigger every time I say balls)–the last few batches of regular sterling wire I got just turned into a crusty mess when I melted it, so I started using only fine and argentium wire for melting balls. Downside, the argentium doesn’t like to be quenched (it shatters!), and apparently the sheet will break or crack too if you move it when it is too hot. Sounds like a pain–if you’re happy with your regular sterling supply you were probably smart to steer clear!