I was going to write about my New Year’s Intention to work on protecting my boundaries without feeling guilty and how Joe from Little Women is my new, just be yourself, hero.

I was also going to tell you about the face rash I developed the week before I was due to fly to England for Christmas which I thought was shingles and which I just knew would prevent me from getting onto the airplane due to being infectious to pregnant women and children and how I would have to stay home alone to suffer my own sad and lonely holiday, but which simply turned out to be an allergic reaction to hugging a friend.

I was also going to tell you about how I’ve fallen three times since August due to not paying enough attention to where I’m placing my feet and how the third time I fell, on Boxing Day, although it seemed that I barely touched the floor with my knee, it resulted in a bruise to end all bruises which has systematically migrated from the tip of my left kneecap down to cover the whole of the front of my shin and which is, even now, moving around to the side of my leg and down to my ankle.

I was also going to tell you that Christmas was good albeit especially cold on the one day we chose to spend in London drinking cocktails in the Ice Bar (because why not spend 45 minutes in a room even colder than the already bitter outside) and taking the Jack the Ripper tour well into the dark, bitter evening. And how I was disappointed with the tour because I, and I think most everybody alive today, already knows the ins and outs and the hows, whos and whys of this particular serial killer and as most of the sites the guide took us to are now either modern office buildings or parts of London which did nothing to call up the horrors of the day we could have happily sat with the guide in a warm pub drinking beer as he pointed to the pertinent locations on a map. All I could think about the day after were the poor half frozen to death prostitutes waiting for tricks on dark miserable corners with nothing but the prospect of getting drunk silly on gin and orange to keep them warm. Which reminds me to look up the months that the murders took place as the idea of a knife piercing already bone-chillingly numb skin seems somehow worse than if the murders took place in the summer months.

I could also tell you how my daughters boyfriend approached me ONE week before we all left for London and asked me to help him make her an engagement ring. Of course he had zero experience and had never made a piece of jewelry before and I had never made a prong setting, but we did it in spite of, or maybe because of, the fact that I told him every inch of the way that he wouldn’t be able to do it. A somewhat new approach for me from the encouragement I normally give my kids. 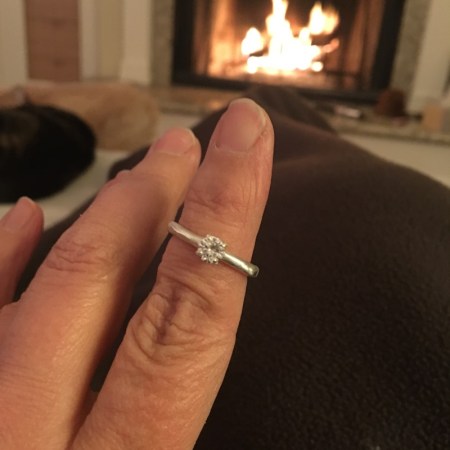 But then I decided to not tell you about any of this, but instead just wish you all a Happy New Year

I love your blog posts! That bruise sounds awful. Usually it seems to go the other way where the injury feels huge but the resulting bruise is tiny ? and the ring turned out great ??

Yes. The first two times I smashed my knees really badly with not a bruise to prove it. The third time I barely brushed the ground with it.

Loved your story. That’s a brave boy with a good teacher.

Happy happy to you too!

The ring came out lovely, hope it had the desired result. And glad you survived it all. I stayed in sunny Arizona, where just last night we had our first rain in months. Rain I love, ice and snow not so much.
But I do love seeing your wonderful creations, so have some new year’s fun in the studio.

Sorry to hear about your bruise that keeps growing. I can understand completely. I fell last June down some stairs, head over heels. I ended up with my pinky finger bent up at the knuckle which my husband pulled on and straightened it out but it’s still crooked and hurts sometimes when I’m working on jewelry. My left elbow and both of my shoulders had awful bruises for about a month and a half. Was not a happy person. But I am still here to talk about it!

I love how the ring turned out. You are a great teacher and had enough patience to get him through it all. Kudos to you and him.

Man! That sounds awful. I am rather clumsy. I fractured my shoulder once which still twinges now and then. I’m walking around right now super aware that I could fall again at any time. I think this makes the possibility of falling worse.

I’m ever so glad I’m getting my tour of Seven Dials from “Victoria” on the telly. As for bruises, my only advice: Do not get on a treadmill (unless you want a bruise the size of Africa); don’t ask how I know. As for the ring, you are the master! I hope your daughter was very happy and that the ring actually fit. 🙂

Happy new year yourself. Sounds like it’s off to a good start.

I’ve only watched the first season of Victoria. What with that and The Crown I’m kind of all royal’d out now 🙂

The ring didn’t fit. I had to change it up when we got home.

I would have loved if you would have told us about all these things.
I would have told you that your daughter’s boyfriend seems to me not the most considerate person in hearth but is smart enough as to ask the right person.
But, and I should have not started that sentence with a “but”, I will wish you a very happy, full of laughter and warm hugs, new year.
Huuugg.

Nice. He must have been pretty confident. Congrats to the happy couple.

Congratulations on the engagement of your daughter! She is very lucky to have been given a ring that has been HAND MADE by someone who loves her – means so much more!! The very best to her and your whole family!

I apologize in advance for asking this because your blog is so very detailed and you share SO much regarding your methods, so I’m sure the answer is somewhere in your comments, but I am curious to know where you advise is the best place to purchase your silver sheets. A lot of the silver I see online is limited to 1″ widths. Just wondered if you knew of a good supplier.

Jill, No need to apologize> I don’t mind at all.

I get my silver from Riogrande. I mostly buy 23 gauge fine silver sheet, but they have sterling silver also. They sell it in 6″ widths with a minimum length purchase of 1″. There’s a box where you can put the length you want to order underneath. I typically buy 6×6 inch pieces.

So this link is for the fine silver and you’ll see that you can choose the gauge in the boxes provided and that underneath that there is a box which says 1. This can be changed to the length in inches that you want to purchase.

You are hilarious and I love your blog. You always make me laugh. I also like how your mind works…the summer vs. winter murder comparison was particularly good. A very valid curiosity.
Hope your bruise is healing.

Thanks so much for your advice on where to purchase silver! Feel so silly to realize it IS sold by most companies wider than 1”…you just have to INDICATE how wide a strip you want?…OOPS!! oh well, I’m learning haha (thanks to YouTube and your wonderful blog!!)

Would you ever consider a tutorial on your method used on the beautiful chain you have on some of your pendants? It is used on your NC106 and NC130 on your current items for sale on Etsy. It looks as if it consists of slightly twisted links alternating with twisted figure 8s. It’s such a unique design – interesting but still delicate enough that it doesn’t distract from the main piece. Can’t for the life of me figure out how you would obtain that slight twist on every link so consistently. I understand if it’s a secret…but would love to know your method! Either way, keep using it – it’s great!!

P.S. I tired my husband out “ooohing” and “ahhhing” over your past work as I went through and showed him each item individually. He finally patted me on the back and said he really did agree that it was all beautiful – I couldn’t understand why he wanted to get back to his movie and didn’t want to devote the rest of the day looking and browsing and dreaming and envying and reading your blog, like I do!! He just DOESNT GET IT!! Haha!

Ha Jill! I wish I was that good lol. This chain is from Riogrande #616762B, but that is definitely one of my secrets 😉

My husband is much worse that that. At least yours entertains you a little bit before giving you the pat. I get so excited when I come in from the studio to show my husband what I’ve just made and he just humphs at it. I’m like a kid just amazed at something I made and he’s not interested at all 😉

Edit: After watching your “banded bracelet” videos, I realized you probably purchased your chain from Rio Grande…should have researched more before asking!