I can’t be bothered to care.

I actually parked outside a shop yesterday and almost got excited about browsing for Christmas presents.

I even opened the car door, but admit I didn’t get a leg out.

It had a lot to do with shopping for the sake of it.

Of buying a gift for someone just because that’s what I’m supposed to do this time of year.

Or at least that’s what I hope it is rather than just being bored to hell with it all.

Because that would be awful…

So I shut the car door and decided to think more about what I really wanted to get everyone.

I just hope it happens sometime before Christmas Day.

I don’t know what’s happened to me, but I really have to get over it already as I’d much prefer to be a green bean than a turnip.

You know, one of those French ones.

On top of all this I’m struggling with deciding whether to go to England for part of the Christmas holiday.

It sounds good doesn’t it.

Couldn’t ask for more really – if it wasn’t for the fear that I’m going to blow up on the airplane, or die in London…

I’m already afraid of flying without having to worry about the recent terrorism.

So when P asked if I’d like to go I said no.

Then I said yes.

Then I said no again.

This went on for about a month, but yesterday, as I tried to get my foot out of the car, I said yes again knowing that it was my final answer.

In that sad resigned voice one has when you know nothing good can come from it.

It was a struggle I can tell you.

Apart from the fact that I would see my family and that is always a good thing, here are the pros and cons.

I get to be with the Fam.

So you can see that I’ve had a bit of a hard time of it lately.

Anyway, turns out the David Hockney exhibit isn’t the one I want to see – I wanted to see the landscapes, not the portraits, but hopefully I’ll still go up into London to see something.

So that’s it really.

No real news except that Cornelius has come across a new plant. 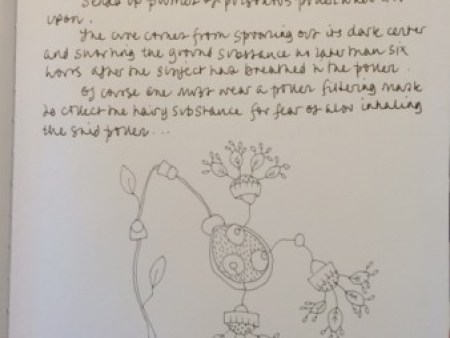 13 thoughts on “December 11 and still nothing done…”

I have nothing done for Christmas either, except my daughter’s gifts. My sons haven’t told me what they want, I have no tree, no decorations. I do have a Trunk Show for my jewelry tomorrow at a local show, so after that, I’ll maybe get cracking.

Go to England. Take a valium, or two, and get on that plane! You will be fine. You aren’t going to die – the odds are against it. And if you do, you probably won’t know anyway. 🙂 Aren’t I helpful?!?!? Any, valium, plane, sausages. Have fun.

I promised myself that this weekend is the one to make some effort. If I can get out of bed of course…

Yeah, I hate to fly so I don’t to England. I don’t have much done yet either except wrapping and packing some gifts for my Granddaughter.
It’s so warm here it doesn’t feel like Christmas. Did a show last weekend, a big one, a nice one but everyone was complaining that they didn’t do as well as they might have. Slow. Not as many people attending as usual. Bahhhhh.
I hope you have a nice time in England. Do your children go?

Shame about the show. I think about applying for one or two more as I only do the one twice a year, but can never get my head around how exhausting the whole thing is, especially if it’s one of the three day ones that I’d really like to do. They’re also very expensive. It would still be nice to try at least one though.

Gale, you will forever be my fight song 😉

I hate to fly because I am not in control. And yes, I do have issues. 🙂

So, instead of offering any commiseration, let me recommend instead that you take 15 minutes and watch this animated short:
https://www.youtube.com/watch?v=S1JoliFXH74
It is named “The Lost Thing” and I think you will enjoy it.

That was brilliant! Thank you 🙂

I love your posts or blog, I guess. Yours is the only one I read faithfully…really. Sort of like I can’t wait for the next one, anticipation. This one made me laugh hard, the laugh that comes from the belly and produces only a squeek or squeal. Oh, I’m in love with your jewelry, love! If only I was a metalsmith. I’m not, so I’ll just keep stringing. Until next time.

Thanks Kathy. That made me feel good. Hope you have a great weekend 🙂

I was just coming to delete my insensitive comment. But why aren’t you in England already?!

I didn’t find it insensitive, I like to keep it real 😉 (You do know that I write my blog tongue in cheek don’t you). Anyway, I’m pretty sure I’d lose patience with a herniated disc.
Not going to England until just after Christmas.

I suspect you have a few tongues in cheek, like me. Glad you can go to England after all! (You would definitely lose patience with two herniated disks. So don’t mind me.)