Every time I look around it’s a new day gone by.

Just yesterday my dad and sister were here and it was July.

Why didn’t anyone tell me that it was going to be December already.

Not that I’m worried about Christmas. I’ve always been a wing it person when it comes to preparations.

In other words I forget all about it until it’s a week or so before, then I get a little worried that I’ve nothing done.

You’d have thought I’d have figured it out by now.

I’m so over worrying about doing things the ‘right’ way. I think it’s one of the best things that comes with getting older.

I could do without the achy joints though.

I think they’ve had it.

I remember when I was at art school lying on my bed one afternoon trying to figure out how old I would be when the new century came around.

Math was never one of my strong suits.

Or maybe my confusion was because I couldn’t ever imagine being that old.

And now that’s over and done with what else is there to worry about.

I’ve been thinking a lot recently about me then and now. I’ve felt a shift and it’s kind of sad, but in an exciting kind of way.

It’s like all of a sudden I’ve become different.

Like a layer has been peeled away and I didn’t do it and didn’t want it to go, but now i’s gone and I’m left a little lost.

Like I’ve got to grow into the new me.

I’m a little worried that I’ll waste myself.

I think a new strategy is in order, one that hopefully involves finishing The Goldfinch because I’ve been reading it for five hundred years now and it looks like I still won’t be finishing it any time soon.

One that involves enjoying stuff, finding out the important stuff, not worrying about what people think about me, enjoying who I am, and finishing things that I love to do.

Looking after myself, and the people I love.

Getting out of bed and getting on with things instead of dreaming about doing them.

(I’m afraid of everything and it’s boring)

Using my powers for good.

And just doing it for heaven’s sake.

Do you think it’s too late for me to be an astro physicist?

Would the math part be a problem I wonder.

As I ponder these life problems I leave you with a new piece. 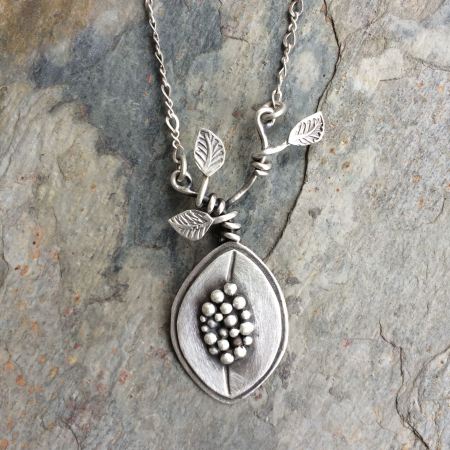 A little seed pod, plucked and fashioned into a necklace before it could grow into the fearsome Triffid it was intended to become.

For the time being at least, we can rest safe knowing that one more threat of world domination has been removed from this world and that we can all put our laser guns away. 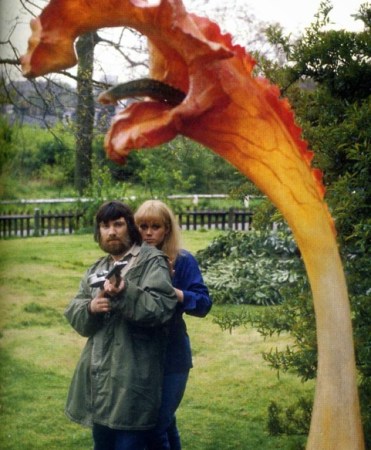 And maybe get ourselves a good haircut and shave already…

You always make me guffaw! And identify! “Getting out of bed and getting on with things instead of dreaming about doing them.” Yeah, kind of a problem here too. And being afraid of everything (you’re right, it IS boring.) Except you’re clearly not afraid of metal! Love your new piece, especially the asymmetrical way it hangs, and those wonderful twining leaves. (And it seems to me you are already using your powers for good, perhaps more than most!)

Sundays – they make me contemplative. I am 54, and feel those layers peeled away also – mother, caretaker, all gone now that my kids are out of the house. I mean, I still take care of them, but not in a day-to-day way. And I miss that. It patched over a lot of scars I had and ignored, and now have time to take out and look at. It’s painful. But also the only way to grow.

And I don’t want to miss out, either. I don’t want to waste this go-round. That’s why I get so annoyed when I get home from work and don’t have the energy to go out and create. Making things feels like my purpose now, and I hardly get to do it. I know, first world problems, but still…I enjoyed what you had to say here.

Hi! It’s been a while since I’ve visited, well actually it’s been a while since I’ve been online! I had to have my laptop fixed & with the holidays & birthdays & kids & life, it just couldn’t be on the top of my to-do list no matter how much I wanted it to be! And what a perfect post to come back to! I’m right there with you… I’ve been honestly trying to rid myself of some “character defects” that I have that I allow to keep me stuck…And for the life of me, I can’t understand why!!! My therapist (yes I admit it!) says I’ve got a fear of success & I let that keep me from being productive… Crazy! That’s why I am so grateful for artists like you that share what’s really going on with them(you) & letting me know that I’m not the only person that struggles with unwanted personality problems & also sharing the ways that you deal them! And of course the witty way that you think about these things helps me to relate & laugh at myself! I also love the new piece & the neat way that it hangs!

It’s great to be back & thanks for being you! You are appreciated!

I sometimes think that being creative is very complicated. It’s so intertwined with our own sense of self worth that if you have little confidence to begin with it can either kill or cure you. Mine was killing me until I found my therapist and since I started my blog. I’ve mentioned before that I started to write it as a ‘faceless’ way to confront my fears and to put them in their place, and along the way I’ve met many people whom I now love to hear from because we seem to all share a common thread. It’s great to know that you’re not alone in the world, and if it can validate you along the way, well the better for it.

I see that your blog stopped in May last year. I think that blogging fills many rolls. Mine, as I said, is a way to lay it all out before me and to see where it goes, and in the meantime learn to not take myself so seriously 😉

I have noticed that you are not ‘faceless’ anymore, Deborah, when I started to read your blog a couple of years ago, I could not find your name anywhere, but now, after searching around a bit, I found it! I think age is a thing we all struggle with, but I have to tell you, you are all still “babies”. When I was very young I also always worked out how old I would be at the turn of the century (50), and here we are nearly 16 years later, and still going strong. I have to say I am having such a good time in my life now, I am just sad about all the wasted years that I cant even really remember what I did and was miserable a lot of the time (apart from raising children, which I suppose I should feel very good about as they turned out great) I just get so worried when the years slip by so quickly! I have ticked off most things on my bucket list, and now just try and enjoy every day and live my life to the full. What worries me even more is that my husband is 6 years older than myself, but we still go on our epic African safaris in our 4 x 4 as often as we can and we can do whatever we feel like, if only it could last forever …… Looooove your pod!