As those of you that read my blog know, I’ve kind of lost my way since my dad died, but I don’t want to give up just yet.

My trip home was good.

I only had a cry three times, including one where my sister lovingly tossed me a used tissue.

Probably why I’ve got the lurgy now.

I ate all of the food on my list except for the pie and mash, fish and chips, and the pint of bitter.

So much food, not enough time.

The flights were awful. The most uncomfortable I’ve flown for a long while and took for ever. We did make it there and back in one piece, however, so I’m grateful for that.

I wasn’t as cold there as I expected, which is unusual for someone who usually curls up in a corner with a blanket and doesn’t come out again until all the heaters are turned up high.

In fact, at times it was just as cold here in Houston as it was in England.

We stayed at my brother-in-law’s house which is an old converted barn.

Actually I think it was the pig sty as the large barn is to one side.

I started a painting of their house before we left, but I just can’t get those pesky oil pastels to dry.

They’ll probably get it two years from now.

Our bedroom was behind the larger window in the roof, above the kitchen door.

The house has the original brick floors and some brick walls, but I really only had to curl up once.

I’m thinking of painting the barn opposite also. 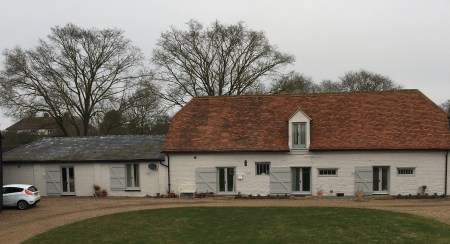 But not the big black barn.

It’s just all barn and windows.

Nice, but a bit boring.

This is the entrance coming into the old farm. 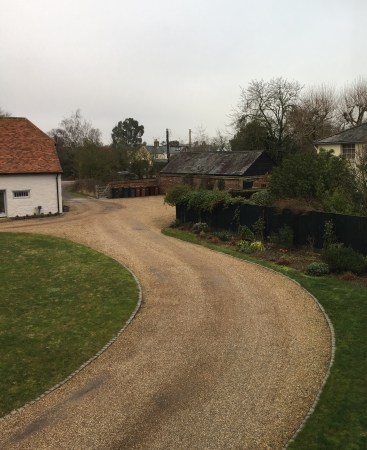 Before Christmas I made quite a few pieces which I shared on Instagram, but only got into the studio for the first time yesterday.

A friend wanted a piece with topaz and amethyst, but it was hard for me to find anything that I liked.

In the end I found these. 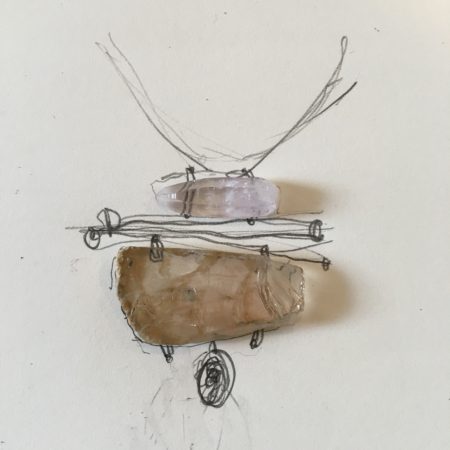 And this is where K and her used tissue comes in.

Usually I’m pretty good at replicating one of my drawings. In fact it always surprises me, but this time. 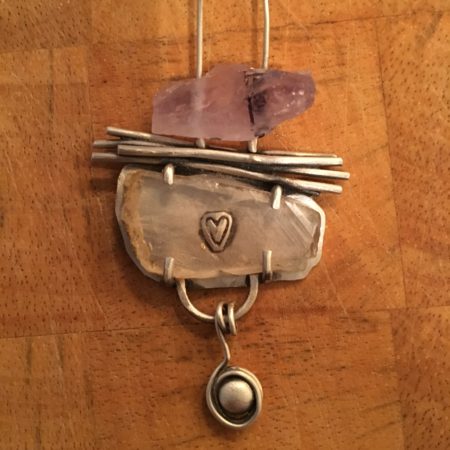 Don’t even talk to me about it.

So today I’m off out to get my hair cut, which always makes me feel better, and then I’m boycotting the studio until I feel better.

I’m going to sit on the sofa and switch off BBC and put on some old film.

An old black and white Barbara Stanwyck movie is my preferred choice, but I doubt I’ll be able to find one.

And I might even start back on my embroidery. 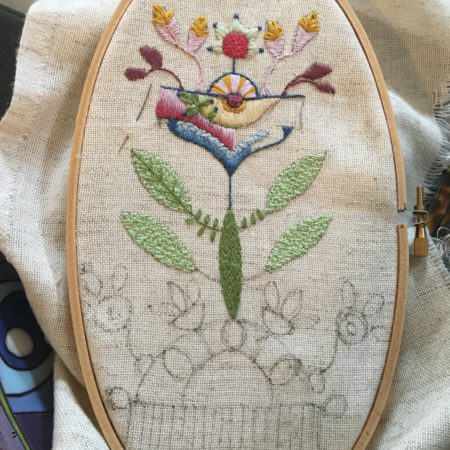 I am soaking in your creativity and lighthearted wit. Need to stay balanced today. Thanks!

You’re back! It sounds like you had a restorative, if short, visit–yay! (I find rural buildings in the UK/Ireland so dang cute I’m squeeing over your pictures. Nothing like being HOME again, no matter how used you have gotten to your current abode.) Love your embroidery–I want that on my clothes!

I’m thinking of making a few patterns to sell. I don’t know though. Have to pay attention to how much thread I use and I haven’t been so successful at that so far. And I know! Some places in England are beautiful. I need to visit some smaller rural areas in the states also.

I thought of you while you were gone – especially your plane ride(s)! Not my favorite thing to do either! Glad you had this time with your family. I LOVE that home! Your painting is awesome – and I am swooning over that necklace! 🙂

He has got a beautiful home in a beautiful area. In fact it’s just down the road from where we bought our first house when we got married. Ours was a Victorian two up two down workman’s cottage though. Not quite as special 😉

Glad you had a good trip, sorry you went home with the gift that keeps giving 😉 and very glad you are going to KBO. I think that piece is lovely. Looks like you used a different amethyst in the end, but I don’t know how you managed to set a piece of silver within a gemstone. Alchemy I guess. hugs.

Ha! I had to look that one up. You’re obviously more a true Churchill Brit than I am 😉 Yes I used a different amethyst and the only good thing I can say about it all is that I drilled my first hole in a stone. I abandoned the second hole because I didn’t like how it was all shaping up. I made the mistake of polishing up the topaz and it became so transparent that it really didn’t offer anything to the piece, in my opinion, so I stamped a heart underneath the topaz. The stones are the birthstones of my friend’s children and I thought the heart might make the thing a little more interesting as well ‘special’ to her, but I just got myself further in a hole and the piece just got worse and ugly. I don’t do hearts very well 😉 The piece is now abandoned.

KBO has been mentioned a lot over here since the election 😉
I hadn’t realised the heart was on the inside of the backplate. That is serious clarity. We all have pieces in the discard pot (me more than most I think!) i try to be positive about ‘the learning experience’ but mostly i just stuff it in the tub, and go and jif the kitchen sink in a strop!

lol I need to try that. Never thought of using my strop powers for good. My house could be spotless!

Your paintings and embroidery are so lovely, too! I love how your style is consistent in each piece you do, in all the art forms you work with. Glad you had a good trip.

Perhaps now that you have been “home” you can get a bit of closure on your dad’s passing and make peace with it. I think I have said so before, but he would not have wanted you to be so miserable for so long after his death. 2017 is going to be a difficult year for all US citizens and, in fact, the whole world, so we all have to buckle up and get on with things! Like Meryl Streep said, turn your heartache into art! A little bit of tough love coming from South Africa! Love you, Cecilia

I know. You’re right. I was in a hurry to get rid of 2016, but really what is in store for us now 🙁 It’s going to get really interesting and I’m not sure in a good way. Love the love from South Africa. I’m having a virtual cup of tea with you as I type 😉