Often my unconscious world is an explosion of activity, and I wake exhausted.

Last night, or I should say this morning as that’s when it seemed all the action was taking place, I was back at university. I had no clothes yet a policeman borrowed one of my bras – a mint green one, (don’t ask). I cooked the biggest potato known to mankind which surprisingly fitted into one of my smallest saucepans. I cried over my mum, I chatted with my aunt and uncle, I gave a sofa to a woman having my surrogate baby – she didn’t want it but I didn’t care, the sofa that is. I valet parked at school – shouldn’t we all. I had to explain that my sister was twenty to a weird little creepy teacher who thought she was just a very mature eight year old. (She’s actually forty-eight, but I think that would have freaked him out even more). We laughed at a satellite photo of how one part of our fence hadn’t been re-stained – in a, in your face, protest of the deed restriction nazi neighbourhood people.

Yes, big brother’s been on our back recently for fence violation, and the missing teeny-weeny flower shaped knob on the post box. Man! You’d think they’d have better things to do, especially as the fence looks fine, and, you have to believe me when I tell you, the knob on the post box is about an inch round. They probably had to use their special Inspector Gadget extending eyeballs to see that one.

They probably stole it in the first place.

And so the dream went on, scene after scene, bizarreness after bizarreness. Mostly to do with school, but I believe there was a toilet drama in there somewhere. Thankfully it wasn’t as traumatic as the time I was on a train, in the countryside, in the dead of night, and Nosferatu cycled by and looked me in the eye. That was a little disturbing. Or the time I was Steven Seagal and … O.K perhaps we shouldn’t go there. 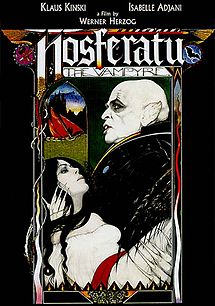 I used to have this poster on the wall when I was at art college. Perhaps it messed with my mind.

Note to self: No more creepy posters. Stick with the distorted female figures of Modigliani. They’re safer. 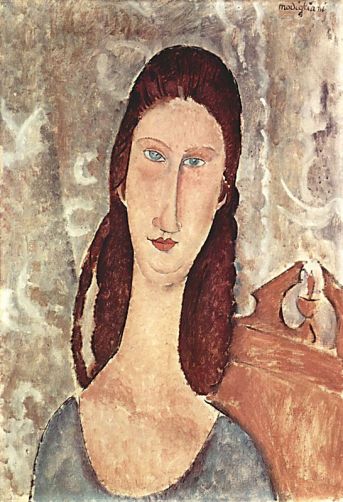 O.K. Perhaps this one isn’t.

She’s got angry eyes. And that double chin isn’t doing much for her either.

So, this is how my mornings usually begin. It’s like I’ve lived the whole day before it’s started. I actually feel worn out and ready for bed now.

New stuff going on in the jewelry department.

Will I be able to cope with this much excitement, I wonder loudly to myself.

I think very possibly I will.

Impressive! I could compile a full year’s worth of dreams and they still wouldn’t compete with this one. I rarely remember them, however I am sure I have a college-related dream at least once a year. It usually has to do with oversleeping and missing exams, or forgetting to go to class for a full term. I would have thought I’d outgrow this by 47.

Me too, but I think I’m growing into them 😉

WOW, I know how trite the word is, but your jewelry blows me away!!! How you have evolved! Some how you need to find a way to have a trunk show!!!
Sorry I can’t be with you on the 4th! I would really like to see your jewelry in person! Best of luck to you at Market Street!

Thanks Ellen, just give my love to Catie.

I love the stones and settings. Are you using precious metal clay? Your writing style is very cool. I have similar experiences, so maybe artsy people are more impressionable and we should all stay away from creepy movies. Cheers.

I know, right. First time I watched a dracula movie I was about 35. Too chicken before that. Locked myself in my room when all the other art students went off to watch The Omen. It didn’t help much as I could still imagine what was going on just from the brief clips I’d seen. And I still haven’t watched The Exorcist. Just writing the word creeps me out.
No, PMC annoys me. The little tree charm is made of it, but I don’t like it at all. Everything else is made out of fine silver sheet or wire.
Nice to hear from you Elise 🙂