Yesterday we picked Willow up from the groomers. Yes, bless her heart, she was shaved again. I know she’s a girl, I know she’s a cocker spaniel and should have all that cocker spaniel hair, but – we live in Houston, and it’s hot. She also loves to ditch swim. Yep in the ditch. She doesn’t like clean water. She will not go in the pool although we think that’s a depth perception phobia rather than a cleanliness phobia. No, she has to frolic in the muddiest water out there. And she ends up stinking. She is a stinky dog. So, I get her shaved. I actually love the way she looks when she’s shaved. She looks fit and lean. With all her fur on she looks podgy and grimy.

Anyhow, we picked her up and as we were waiting a lady, who looked quite sensible and normal, was there picking up her two dogs. Cute dogs. As she took them out to the car I noticed that one of them had red on its nails. I just got a fleeting glimpse but it was definitely red and it worried me. What manner of nail eating disease could result in such a vivid, horrific, colour? But I knew it was too red and too uniform to be anything normal. I turned to the girl at the counter and admit I felt a little stupid, as surely, surely, it couldn’t be nail polish. But yep, it was. I asked, what on earth?! I asked, why?!! I even had my incredulous and amazed face on. The girl looked at the dog’s chart, and, honest to god, answered as though this was not the strangest, most bizarre thing on earth. With a straight face she told me it was a ‘female’ dog. End of story. She all but added the word, duh! at the end.

And? I wanted to ask, but obviously the female thing was answer enough for her.

Who was I to question the madness. 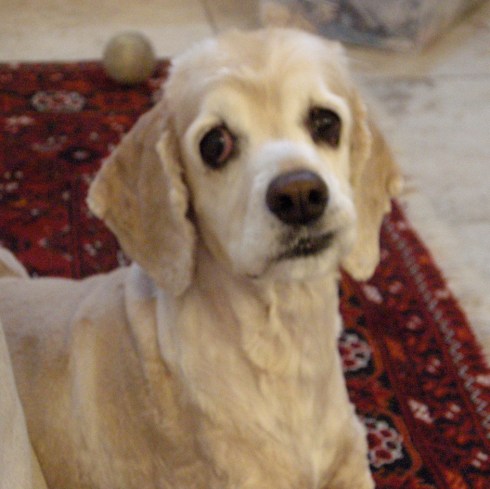 I’m sorry Willow that I didn’t get your nails polished.

Maybe next time I’ll treat you to a blue rinse.

Willow is so cute with her haircut. I think she would certainly like her nails done, too. lol

We used to have our blonde cocker sheared in the summer also. Cooler and no mats in the hair!

yes, I’m sure she would. i’m definitely thinking about the blue rinse, however. she is getting on a bit now. maybe red nails are a little too risque for her.