Mostly it’s because I’m impatient which, of course, often times means that I end up needing to work on something for longer anyway because I didn’t pay enough attention in the first place.

So I’m going to step it up.

I know I stepped it up once before, and that was a good thing, but now I want to work on always being able to know, with confidence, that what I’m doing is definitely going to work the first time and that when it goes out the door I’m completely satisfied that it’s the best I can do.

I know it can be done.

I know there are people out there who are so bang on their game that they’re just brilliant at it.

Don’t get me wrong I’ve enjoyed my new pieces.

But I always get worried when one of them goes out the door.

It’s worse when I see that I have a review on Etsy.

I can literally feel my heart stop a beat because I know they are just so disappointed with it and I have to cross my fingers to see if it’s going to be o.k.

Crossing my fingers, by the way, happens to be my go to safe place.

Nothing bad will happen if my fingers are crossed.

Well that’s what I tell myself anyway…

It’s amazing to look back at pieces I made when I first started out and didn’t know what I was doing.

The amount of solder I used for instance. 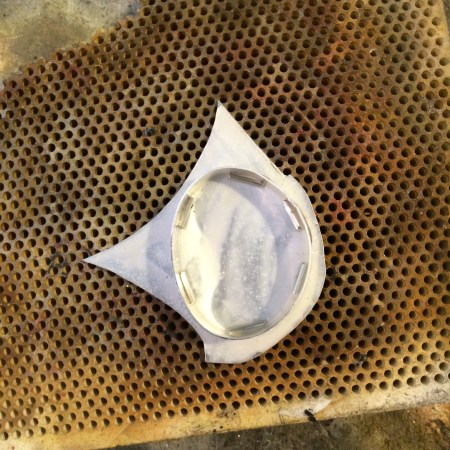 But you don’t know these things unless you keep on doing them wrong until they whack you over the head.

And that’s o.k. as we all have to start somewhere.

But for a while now I just would really like to not do it wrong.

And for me that means slowing down, paying attention, and finally being able to let go of a piece knowing that it’s everything it should be.

Too much perfection I hear you say.

But if I don’t try I’ll be bored me thinks.

I told my husband last night that I should call myself “Good Enough Jewelry and Pottery.” Cause I often say, “That’s good enough!” And usually, it is.
I have some friends who make beautiful jewelry, very shiny, polished, cut stones, perfection. That is NOT my style. I am more and more attracted to raw, organic jewelry. Don’t get me wrong – last year on Instagram, this self-taught very new jeweler was selling stuff and because it was trendy, “native inspired” with lots of feathers and stamping, and it was selling like hot cakes. But she had spilled solder all over her pieces, she had gaps where her bezels didn’t sit. She started getting complaints on her feed, and she stopped selling jewelry, although the complaints continued. I contacted some of her unhappy buyers and offered to fix their jewelry (for a fee) and I did – what a mess she was. So that’s NOT what I mean by “good enough.” I mean it has to be technically perfect, not falling apart, etc., then the rest can be more organic, casual.
There is a seller on etsy, she sells a ton of stuff. Her jewelry has a really good look, but she, too, has solder blobs all over the place, firescale which she covers with goldleaf, and she has adoring fans. It is a “look.” The old Russian goldsmith I studied with for 8 weeks several years ago would have a heart attack – his work was perfection, of course. I think I fall in the middle – I saw properly, I file correctly, I solder correctly, but I am not into high polish, cut stones, etc. My friend says that is where the middle-aged and upper middle class money is, and I think she is right, but hey – that’s not me. I am too old to pretend anymore that I am someone else. And your work and jewelry is amazingly beautiful as is.

Oh my God. I want an old Russian goldsmith!
I know what you mean. I like the casual, rustic looking jewelry also, but I guess insecurity gets the better of me for the most part 🙁

The only thing I can see that you’re doing wrong is…worrying. You certainly take care with your pieces already.

I think I may get dizzy if you step up your game any further…. But I’ll be waiting!

Right as usually. Having a particularly worrisome day. I’ve got pizza now, and wine, so things are looking up 😉

It is even worse when you don’t get a review! A while back a lady from Cape Town asked me to make a wedding ring for her husband, but it had to be organic and rustic but not too rough as he did not like his first one, not too hammered like the one in my picture etc etc. She even sent me a video of a ring she liked. I would have refused the order, but she had already paid the money to our local online shopping line and we suspected she would not get it back. I made the ring the way I thought her and her husband would like it, and then never heard anything back. So now I am thinking they did not like it!!! I should have contacted her to ask but for some reason I did not. Now I am going to wonder about it for the rest of my life!

lol I know. The silly thing about me is that I have a couple of people that come back for more jewelry, and I still think they won’t like it. I have to convince myself that they wouldn’t come back if they didn’t. As for people who don’t give feed back, I try to think that they wouldn’t necessarily do that if they bought from anywhere else. A brick and mortar store for instance. Doesn’t work. I just know they were disappointed 😉

Ah. The review nausea. I am beginning to recognise that getting a formal review is something that most people don’t give a second thought to. Often I receive a very happy message about the item they just unwrapped (then of course I worry it will self destruct!); sometimes even a photo and a bit more feedback a few days later. Rarely a formal review. I’ve even had personal friends buy things from me that they picked out themselves and tell me they love – and I see them wearing said items (when they aren’t expecting to see me) yet STILL no bloomin reviews.
I like that Etsy doesn’t nag people to add a review, but I wish it would give every customer just the one reminder, at 30 days
It’s a lottery. And I fully get the nerves when something less than the quality one imagined leaves the house…but I have to tell you; your stuff is still inspirational to me. I love that it all looks individual and hand crafted with care and attention. Kudos, and cake. x