O.K. so I didn’t actually know Charles Dickens, but I’m pretty sure I spotted him in the street that one time in my other life.

Think it was him, those Victorians look all the same to me…

So today, rather than wallow which I’m apt to do, I finally decided to implement Stage One of the rest of my life.

First up I have deleted all of the games I have on my phone. A huge beginning of which I’m immensely proud.

Of course it’s only been two hours, but I’ve only missed them once so far so I think it’s going well.

As a consequence I’m up and out of bed literally 45 minutes earlier that usual. This could change of course as I haven’t yet banished the computer from the bedroom.

I decided to launch Stage One as I’ve been having a really hard time with the death of my dad. It’s kind of taken me by surprise as I wasn’t so bad when my mum died.

Feel a bit guilty about that.

Maybe it’s because of this that for a while now I’ve been aware that my life has become rather middle-aged and flabby and It feels as though I’m living in a static world of nothing much in particular, so I think now is a good time to either make my move or forever hold my peace.

And so the first step toward my Brave New World, (didn’t know Huxley either which is probably a good thing as he’s a bit too intense for me in that extremely negative yet prophetic way of his) was to banish the phone games.

I feel rather liberated…

And now, with all my free time, I’m going to find some more positive things to waste my time with.

But first to the studio to finish this, 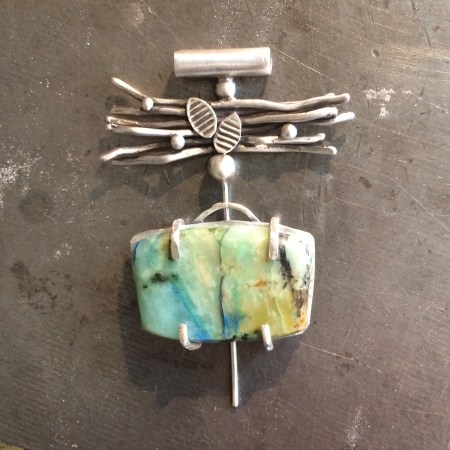 And to make another one of these. 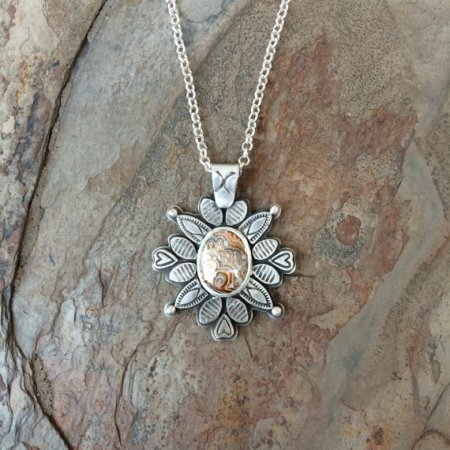 13 thoughts on “Things are getting bad – please send chocolate. Or, as my good mate Charlie once said, Desperate Times…”

No chocolates but I send you good luck. I am at a crossroads as well, just sent my youngest off to college and by oldest to study in Scotland. Dog passed on in February so its me, hubby and a somewhat disinterested cat. I plan to spend even more time in the studio and garden, I hope you will to because I love your work. I also like your sense of humor. Hang in there.

Your jewelry is lovely Lenore, so much less stiff than mine. I love this one particularly
http://www.botanicabead.com/#!IMG_0294/zoom/ctzx/dataItem-iobs9beh1

There is no time limit on when to stop grieving; nor is there a “standard” by which to measure the intensity of that grief. The fact that it was a surprise to you is a factor as well. Stop judging yourself while you grieve …please! Personally, I have been through my own “mid life crisis” since I turned 40. Going on 16 years now. Why am I “here”? Am I making a difference? There are times-still-where I truly believe that I am invisible to everyone around me. But you are on the right track…because chocolate fixes everything.

lol yes it does! except I don’t really care for it. I know, strange but true..

Yes, it can start to feel scary when you spend an extended period of time checked out of everything–I worry I’m going to stay like that, but it always seems like I just wake up one day and know that it’s time to get moving again and I do. When you’re exiting that stasis period, just doing something, even a seemingly small thing, to move forward certainly feels good. (I remember when Farm Town was sucking my life away, as I was harvesting (i.e., clicking on) my crops and trying to find other hapless Farm Town addicts to “hire” to “harvest” my crops. Amazing all the time I had when I gave up farming.) I do think some “flabby” down-time is necessary when we are struck a hard blow, but when you start to feel in your soul as if you have stayed too long it is time to move again. Grief seems to come in waves, though, and I would expect you might need to drop out of things again for a bit at some point to let that wash through again. Maybe more than once. And that is perfectly all right. You will come back again if you do, when you are ready.

Omg Farm town/ville! I remember. What the hell was all that about I spent loads of time rearranging my farm! And then I had a darn Island! I think I’d lost my mind!

I do feel as though I’ve checked out a bit. I know that it’s o.k., but I just feel so boring. I can’t even think about blogging, etc., which is a shame as I’ve really come to enjoy my little ‘chats’ with everyone. I know it will pass, but it certainly is a different world for me right now.

I’m pretty sure that Charlie was my cousin’s husband. Spittin’ image. (I may just send you a pic.)

Anyway, I guffawed about the chocolate because just as I was about to complain that I’m deprived because I don’t even care for it, you beat me. There must be something else for us wallowing orphans besides phone games.

I have not quite managed Stage One of the rest of my life yet, but you inspire me. And at least I’m not too far behind simply because I never had a cell phone, thus no games. Though weirdly, I, too, have recently resolved—just resolved, mind you–to hide both the laptop and the inherited ipad in the morning from now on. I’m afraid I won’t get to look at your jewelry and other creations if I really banish the devices altogether…. Honestly, I find that your pieces take a bit of the stiffness out of the metal…

As for me, while I’m still figuring out what to do with my life, I’ll just go dig in my dirt and divide some irises before the temperature gets back up in the nineties.

Irises are my favourite alongside Freesias.

I can’t banish the computer either, but am working my way up to get it out of the bedroom for stage two of stage one. Probably not until Monday now as I always need to get distasteful things over and done with at the beginning of the week 😉

Farm Town was like a fugue state. Or a fever delirium.

I can’t wait to see what stage 2 will be. I have complete faith that you will come back when the time is right for you. You survived the vaca I see. I’m not sure exactly how people became so involved with the games or have I been living on an island? Your humor is always so enjoyable. I think you are a creative genius! So many talents. You inspire me!

Not so much a creative genius as a all round wannabe 😉 As for the games I think Keirsten is right, it’s a good way to escape for a while. Dissociation of a sort 🙂

Okay, I’m buying a phone. I need to play some games.